Someone recently gave me an excellent blog idea: Find a movie that I loved when I was around my own kids’ age and document their reaction as we watch it together in present day. The movie I selected was the 1990 holiday family classic, Home Alone. 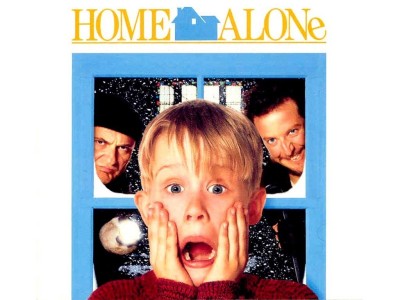 ‎Macaulay Culkin was 9 years old when he appeared as little Kevin McCallister in the holiday cult classic, Home Alone.

My oldest son is 12, my middle son is 11, and their little sister is 6. Technically, I was older than them when Home Alone was released, but I figure Macauley Culkin was about their age when he starred in this film so it passed the test – pursuant to my imaginary rules that I feel the need to justify for some dumb reason.

The following is a summary of our (mine and my children’s) combined streams of consciousness as we watched the movie together.

If you’ve never seen it…seriously, who are you?…the basic plot of this movie is that Culkin’s character, Kevin McCallister, has a large family and often feels like he’s either left out or being judged unfairly. He wishes they would all just disappear. The family leaves on a vacation to France for the holidays thinking that Kevin is with them, but realize mid-flight that they accidentally left him behind. Kevin has to defend his home against burglars while they are away. Hilarity ensues.

Not even 10 minutes in, I realize there are a lot of inappropriate words spoken that I never questioned as a child, which makes me believe I was either completely clueless as to what I was hearing back then or had become completely immune to their effect after absorbing them spoken so often at home. (My parents got their first EVER computer last year and started following my blog so I like to add in little fabrications here and there just to freak them out.)

There’s nothing quite like your daughter asking you what that falling object is (at the 1:07 mark in the clip below) to make you feel like an utter failure in the domestic duties department. Me: “That’s called an iron, sweetie. We have one…somewhere.”

I remember that seeing a tarantula crawl on burglar Marv’s head was the only thing that really made me cringe when I was a kid. Not the possibility that I could be left alone, or the fact that burglars could terrorize me, or that a boy my age had a Playboy magazine in his treasure chest.

My boys and I talked about all of the highly unlikely scenarios we were watching. How could NO ONE in a house of 20+ people wake up if they needed to leave for the airport at 8 a.m.? EIGHT A.M.?! There’s always at least one annoying morning person who is on their second cup of coffee or who has run their second mile by then. And then, when they did all wake up in a total frenzie running around barking orders at each other, little Kevin was able to sleep soundly through that mayhem in an attic?

Then the dysfunctional family arrives at the airport and runs right past the ticket lady who happily catches their boarding passes as they fling them at her en route to their seats? Not a single I.D. check? These people seem completely safe to board the aircraft I guess.

And what is UP with Uncle Frank McCallister? Is he not the biggest another-word-for-donkey on the planet or what?

I’m a realistic woman. I know my kids are far from perfect and are bound to do some pretty regrettable things throughout their lifetimes. But if any of my relatives were to snap at any one of my children like Uncle Frank yelled at Kevin, well, I’d be hard pressed not to retaliate with a few counter-insults of my own.

I NEVER LIKED YOUR JELLO MOLD OR YOUR HUSBAND, MARY!

My oldest son dryly pointed out that it took roughly 22 minutes from the time Kevin called 911 until the police actually arrived to help out. I hadn’t even noticed because I was too frustrated with the fact that Kevin refused to recruit his creepy old man neighbor for back-up. I mean, COME ON KEVIN, the guy admitted to having anger management issues which clearly resulted in him losing touch with his son and grandchildren. BRING THAT SHOVEL-WIELDING-DIRTY-HAIRY-WANNABE over to your house for protection!

Part of me was tempted to show my kids a picture of present day Macaulay Culkin, but I figured that might be as traumatic and disheartening as the whole Santa thing. Some secrets are better left untold. (OK that was mean…heaven knows I don’t look half as cute as I did when I was 9. Sorry, Mac.)

When it was all said and done, I could tell by the smiles on my kids’ faces that they enjoyed the movie as much today as I did back in 1990. I encourage you to try this little experiment with your own kids, nieces/nephews, or other little humans and report back in the comments.