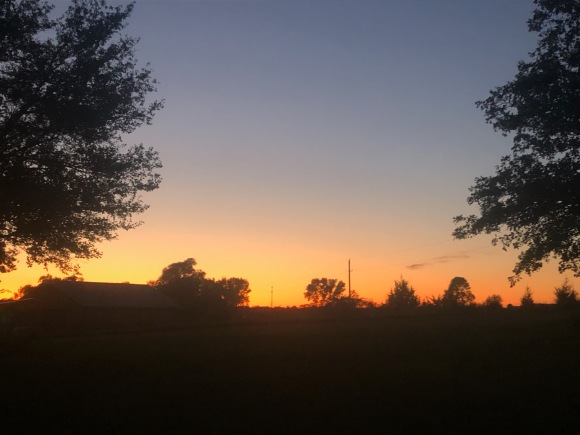 I gave myself an unexpected gift today

It cost nothing but patience and introspection

It had been some time since I opened up my head

To receive the lessons that one can only unearth

When you say “no” to pings and “yes” to prayer

“No” to calls and “yes” to callings

“No” to distractions and “yes” to darlings

“No” to surfing and “yes” to serving

Turning away from all screens

Being in the moment

Why do we choose in our painfully brief lives

To fill the gaps with meaninglessness?

Overflow them with mindful abundance instead

My ultimate goal is to create 100 of these 100-word posts in no set time frame. Thanks for following along!

If you’d like to read the first three installments of this series, you can find those here, here, and here.

For my fourth and final installment, allow me to introduce you to Drake University‘s Head Women’s Volleyball Coach, Darrin McBroom. 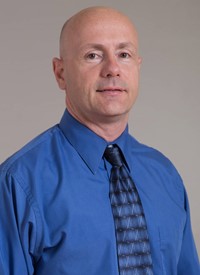 Darrin is unlike any other coach I’ve featured, in that, he was nominated by a former player. She thought he deserved to be recognized for the profound effect he had on her and her love of the game. There’s something to be said about a coach who impacts his team so much that his legacy endures long after the individual athlete’s playing days are done.

Here’s what Darrin’s former player, Erin, had to say about him.

Message: I played volleyball in high school and was a decent player but I definitely did not love the sport. I didn’t want to rack up student loans so I looked into playing in college. I committed to Iowa Western and played for Darrin McBroom. He made me fall in love with the sport and helped me go on to play for an NCAA Division I program. I played many sports growing up and had many coaches, but he is by far the best coach I have ever had. He always had motivational stories to tell that related to parts of the game and always respected his players. He now coaches at Drake University and I thought he’d be a great coach for you to interview.

I believe it’s important for coaches to know that the time, effort, and personal sacrifice they put into developing their players – everything they do day in and day out – does make a difference. Not only does the approach and dedication Darrin applies to coaching result in winning programs; more notably, he’s left lasting impressions on the athletes who have played for him over the years.

Below are three questions I asked Darrin to answer and his corresponding responses.

Q1: You are the first coach to be nominated for inclusion in this series. Your ex-player who nominated you credits you for helping her fall in love with the sport of volleyball. How do you manage coaching different players who each possess not only different skill sets but also different levels of engagement with the game?

Darrin’s Response: Well, the one commonality that all of my players have had is a love for volleyball and for competition. While at Iowa Western, I coached players from China, Brazil, Puerto Rica, Russia, Ukraine, Dominica, Canada, and the U.S. The one thing they all had in common is that they loved to play the game.

For myself, I walked away from a full-time teaching career…giving up summers off, tenure, and higher pay…to become a full-time coach at Iowa Western because I loved the game and I loved being a part of these teams and the lives of these kids.

I always wanted each season to be one of the greatest experiences that they had ever had playing volleyball and I knew if they were having a great experience, then they would give the best they had to me and the program. Integral to that experience was striving for great achievement on the court (individually and as a team), developing life-long friendships, and creating life-long memories. These teams were always like a family to me and I encouraged that kind relationship among them.

Q2: What’s something that’s kept you up at night over the last two decades coaching volleyball (meaning, is there something you try to control but seems to be uncontrollable)?

Darrin’s Response: Although people talk about the challenges of working with young people, that is all I have ever done and all I know. While I certainly have agonized over some of the poor choices some of my athletes have made in their personal lives and academically, it is not the athletes that have kept me up at night.

Q3: Do you or members of your coaching staff keep an eye on the social media accounts of both existing and potential student-athletes? If so, what advice would you give to young adults about their digital profiles?

Darrin’s Response: As a general rule, I and my staff do not specifically monitor our athletes’ online profiles or those of incoming athletes. However, we have from time to time become aware of postings or statements that they make.

We take the time to make sure that these young women understand that what they put out on the internet is a representation of more than just themselves, but also the University, our program, and certainly all of their teammates. Therefore we advise them to be very judicious about what they put out there, especially since it cannot be taken back.

I would recommend that all young people be very careful and deliberate about the creation of their of their digital profiles as I do not think they realize the impact that one inadvertent comment or photo can have on their future.

Darrin is entering his fourth season at the helm of the NCAA Division I Drake Bulldog volleyball program, which competes in the Missouri Valley Conference. Prior to joining Drake, he spent eight seasons in the National Junior College Athletic Association (NJCAA) where he compiled an overall record of 322-58, earning a winning percentage of 85 percent, to rank him among top 10 active coaches nationally across all NJCAA divisions. Read his complete coaching bio here.

The Sharing Wisdom: A Series of Coaching Perspectives is written by Heidi Woodard.

I refuse to rally behind baseball camo jerseys

Baseball is a game of long-standing tradition. I firmly believe that no other sport has remained as true to its original form.

Prior to the last couple of years, I could confidently state that basketball players were flashier, football players were more obnoxious, and golfers were overly tailored. The good ol’ boys of baseball simply came out to play. They only needed their mitts, their caps, and a wooden bat.

Baseball player uniforms were as pure as the game.

The uniform arsenal typically consisted of a white jersey and a jersey of color. Pants were either solid or pinstripe. If players wanted to get super crazy, they might choose to slap on some eye black. 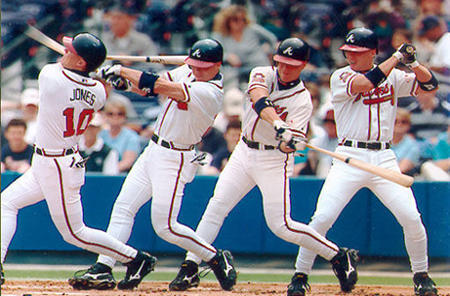 Perfect swing by Chipper Jones of the ATL Braves, who is darn near perfect himself. 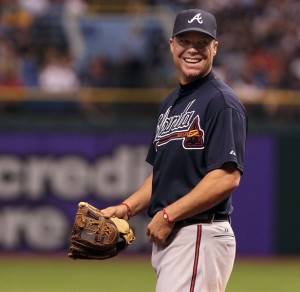 Chipper Jones in a navy Braves uniform. Man, I miss seeing this guy on the big screen.

Then something weird happened around the year 2000. As far as I can tell by my extensive online research (searching Google for 15 minutes), the San Diego Padres decided to up their long-standing tradition of supporting the armed forces by introducing camouflage jerseys on Military Opening Day.

Over the past decade, much to my dismay, the camo jerseys have multiplied faster than mogwais dipped in water. Kids, if you don’t understand this reference, do yourself a favor and watch Gremlins today.

I mean, seriously…They. Are. Everywhere. From the big leagues to the little leagues and at every level in between. They are worn by players and coaches alike.

I now find myself walking into the ballpark somewhat guarded, wondering if I’m going to be attacked by a barrage of paintballers when I least expect it.

Some uniforms are more obnoxious than others. 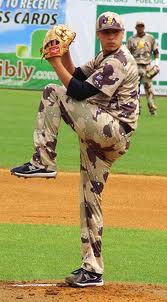 The little guys who look up to the pros want to emulate their idols. Therefore, new this season, both of my own boys’ teams have included a camo jersey in their uniform arsenal. 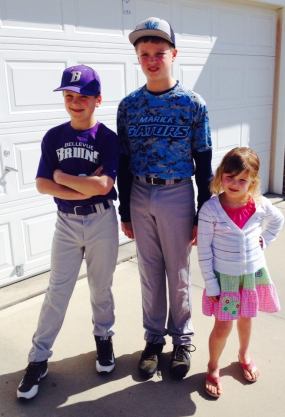 Exhibit B: The 12-year old in his camo jersey – preparing for battle on the ball field (eye roll). The 10-year old’s jersey has yet to arrive.

While I realize the game is not about ME and my personal preferences – this is an ongoing lesson I am struggling to learn – I’d like to believe I’m not alone when I say that the only people who should don the camo style are those serving in the military or trying to hunt down defenseless animals.

One serviceman quoted on Paul Lukas’ website, Uni Watch: The Obsessive Study of Athletics Aesthetics, had this to say:

“I’ve been in the Army for a little over 12 years. I appreciate the thought and tribute behind teams wearing military-themed uniforms, but I have yet to see one that didn’t look horrible. I hate to criticize without providing a viable alternative, but I think they should find another, more aesthetically pleasing, way to express their patriotism.” — Jon Vieira

Jon, I respect both your service to our country and your common sense in general.

I plan to continue to add pictures of camo jerseys I see at youth ballparks on this site as the season progresses. If you like them, try to convince me why in the comment section. If you don’t like them and agree with me that they’re obnoxious, I’ll count your comment as a signature in my ongoing petition against this black mark on the history of baseball.