March matrimony madness: saying “I Do” to a lifetime of basketball

On a semi-steamy day back in July 1999, I said “I do” to not only my husband, Ryan, but also to a lifetime of basketball.

You see, for those who don’t know, my husband is the son of a legendary basketball coach in and around the Midwest, Doug Woodard. My father-in-law has coached for an eternity. I’m sure there’s an actual number of years I could plug in there, but the past 17 years have been at Bellevue West High School leading the defending Class A State Championship Thunderbirds team. 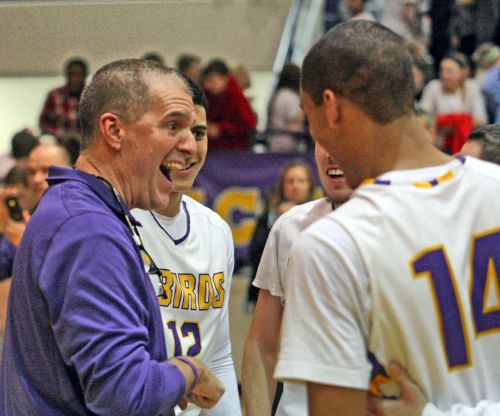 Before Bellevue West, he dedicated his time and talent to Omaha Roncalli Catholic High School. It was at Roncalli where he coached both of his sons and where my husband and I met in one of those weird classrooms that brought together a perfection-seeking honor roll girl with a slightly cocky boy who rarely opened a book outside of the classroom. It was at that same high school where Ryan and I played our best years of basketball, not knowing back then that we’d one day have three kids of our own learning how to play a game they love.

Before Roncalli, Doug coached student athletes at Bellevue Christian High School. And he still hears from those same kids even now, over two decades later, which is equally amazing and inspiring to me.

And I’d imagine that, before Bellevue Christian, Doug was thinking of ways to transition from playing a sport at which he excelled to coaching his own kids and other people’s kids on the proper ways to pass, dribble, box out, rebound, and shoot (in my husband’s case, ESPECIALLY shoot).

My sister-in-laws both played summer basketball for their dad and then went on to compete at my collegiate alma mater, Creighton University. Considering they have basketball in their blood, I am still amazed that the Woodard clan accepted me – a collegiate softball player – into their hard court crew.

Ryan has now coached our oldest son and his teammates, the Junior TBirds, for the past six years and will both mentor them and learn from them in their final season – as eighth graders – next year. I think I’ve had nearly all of those boys in my kitchen and driveway at some point. I’ve watched them transition from simply learning how to dribble the ball to orchestrating moves that I know I personally would not be able to defend.

Last night, Ryan sent out his end of season thank you email to all of the players’ parents. He told them he will be discussing their son’s player evaluations one-on-one with each boy this weekend. He will guide these young men on what he considers to be their strengths as well as areas they can improve upon over the summer.

These players have one more year to work on their game before moving on to high school, a leap that history has proven some boys will make and others may not. I want to cup each of their faces in my hands, look at them straight in their eyes, and say “Enjoy every moment because they are some of the most fun and fastest fleeting you will ever experience in your lives.”

Ryan doesn’t hear it nearly enough, but I feel really lucky to be married to him. When it comes to the influence that both he and his father have on young men’s lives both on and off the court, I feel like the apple does not fall too far from the tree. I can confidently say that I married into a good bushel.

One downside of having basketball in the blood? Our own children will never have perfect school attendance…at least not on those years when grandpa’s team makes it to the state tournament!

Here’s wishing all of the state qualifiers good luck this year down in Lincoln. 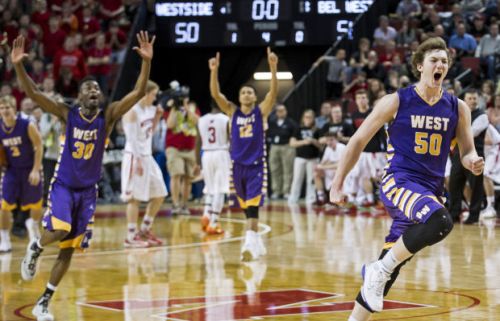 4 responses to March matrimony madness: saying “I Do” to a lifetime of basketball