Considering I’ve been writing a lot of unsolicited advice columns that have resonated with so many (and by “so many,” I clearly mean a half a dozen), I thought I’d toss this one into the mix.

The way I see it, every young, old, and somewhere-in-the-middle guy who’s interested in snagging a wife has to make a decision.

Do I want a girly-girl who will spend countless hours moisturizing, primping, styling, pedicuring, manicuring, and taking great strides to stay in optimal viewing condition? One who will make my friends do a double-take and extend me high fives when she walks by?

Or do I want a gal who I think is hot as-is, who takes no more than 30 minutes to get ready, and who actually enjoys hanging out in sports bars with me? One who doesn’t really care about labels, latest trends, or the pages of Vogue? Or the fact that I pass gas from time to time?

I realize there is a middle ground, but for the sake of argument, let’s just assume these are the two main choices.

If you’ve seen me or read any of my ramblings, you know I fit into the latter (well, minus the whole farting thing…gross). I would also classify myself as an ex-jock…a highly-competitive one at that.

For all the fellas stumbling upon this post, I’m here to tell you something: you need to be able to accept the bad with the good if you’re married to someone like me.

Rewind to earlier today: I agreed to play a double-header softball game because, why not? Sports like slow pitch, after all, are where all former ball players eventually end up just to feel like they’re still in the game, right?

Before heading to the field, I made a quick stop at Walmart (the closest place to hell on Earth any of us mere mortals will ever experience) because I am completely out of contacts. I quickly realize that, although the store itself is open, the optical center isn’t. So, yay me. I’m in make-shift rec specs from that point forward.

In spite of looking like a washed-up female version of Ricky Vaughn, I played a pretty solid first game. We won by a small margin. I was on a winner’s high heading into game two.

I can’t even be mad that I’m a lot jigglier than I used to be when I was in prime playing shape. With a guy who looked like Santa in the summer time umpiring the field, I assumed things couldn’t possibly get any better.

We were barely into the second game when a girl came up to the plate whom I personally know. She’s a good hitter who can pick out which field (left, center, or right) she wants to target and rarely misses her mark. So you can imagine my surprise when she got under one and popped up into foul territory, but within my general vicinity at third base.

Have I mentioned I’m slightly competitive?

I instinctively took off in a semi-fast jog backwards and extended my throwing hand to find the fence while attempting to simultaneously reach over my head with my glove hand. The fence creeped up on me a little faster than I expected.

I bounced off it.

I felt some pain on my ring finger and reassured everyone I was ok.

Without looking at my hand, I trudged back to third base and prepared for the next pitch, which OF COURSE she smashed into the outfield.

As I was mentally retracing what I could have done differently, I looked down at my hand to make sure it wasn’t bleeding.

That’s when I saw the remnants of the ring my husband bought for me as an anniversary gift. It was bent so badly that the blue topaz stone had completely popped out of it and was so misshapened that I knew I wouldn’t be getting it off my finger until some swelling went down.

For the next several innings, anytime our team was up at bat, I retraced both the inside and the outside of the fence I smashed into. I cursed myself for being so dumb to wear my anniversary ring while playing softball.

When the game ended due to the mercy rule in the opposite team’s favor, my entire team searched for the stone…as did the girl who hit the foul ball in the first place. I never did regain it…or my dignity.

How does this story apply to my advice to all the guys who share their lives with ex-jock wives?

Don’t get mad at us for breaking sentimental jewelry (luckily my husband understands). Because when a foul ball taunts us into believing that we have a chance to catch it, no matter what obstacle stands in our way, we will go after it every time.

The top picture shows my anniversary ring the day I received it. The bottom pictures shows what’s left of it after today’s outing. 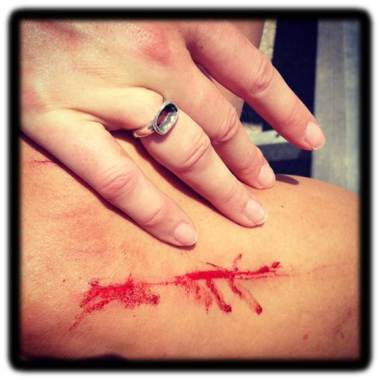 My jacked up finger. My sliced up leg. No one can accuse me of not going all out.

I’d give you more helpful pointers, but I’m off to watch the Atlanta Braves game on TV with my husband.