Top 10 list: How to survive a summer of youth sports

I vaguely recall what it feels like to have a normal summer. Summers gone by involved my husband, Ryan, and I spending time with friends, playing slow pitch softball or sand volleyball, grilling out, and chilling out.

We then mutually agreed to welcome three little time suckers into our lives. And, better yet, we agreed to raise them as mini versions of ourselves. So, to answer your inevitable questions: Yes, I do know what I signed up for and, no, I am not expecting you to feel sorry for my self-imposed schedule.

Baseball was a sport that Ryan tolerated. It was an off-season activity that he played just to keep himself occupied. As one of the most impatient people I know, Ryan could never embrace the pace of baseball as a player. It actually makes me laugh to think about him standing in the outfield as a young man, shagging balls for his teammates, staring blankly into space, and questioning what he was doing with his life.

I, on the other hand, looked forward to softball season every summer as a player. While sports like basketball and volleyball were fun and challenging, there is something about being able to be outside with your friends, getting dirty, and daring a pitcher or hitter to attempt to smoke a ball by you. This isn’t the first time I’ve argued that the game of baseball/softball is the best sport on earth.

Fun fact: Baseball is the only sport where the defense controls the ball.

Now that I have two boys playing a combined 100 games in the summer and their little sister who has the distinct pleasure of being dragged to most of them, I can tell you this: Baseball is NOT always the best sport on earth to experience as a parent of a player.

As we enter the month of June (baseball season in the Midwest begins in late April and runs through early July), I know I’m not alone when I say that – despite the fact I haven’t personally played a single inning, I am tired…exhausted actually.

For those of you who are in the same boat as we are with multiple kids involved in athletics, here’s a top 10 list for parents on how to survive a summer of youth sports:

#10 Say yes to any and all invitations to let your youngest child go to a friend’s house. A mom of one of my daughter’s friends asked if my daughter could come over for a play date today. I had to control the urge to give that mom an extra long, awkward embrace when I went to retrieve my child after I watched two games of uninterrupted baseball.

#9 Beg the grandparents to take one of your boys off your hands – divide and conquer transportation to/from baseball tournaments, uniform coordination, and fast food consumption.

#8 Talk yourself out of feeling like the worst mom on the planet because of your inability to clone yourself. You are going to miss out on a few big plays in order to see others.

#7 When the kids aren’t playing up to their potential on the field, do me a favor: Look to your right. Look to your left. Remind yourself that you are not alone in your misery.

#6 Remember what it was like to be a kid. There is a difference between embracing the present and reliving the past. I freely admit that I do a little of both. 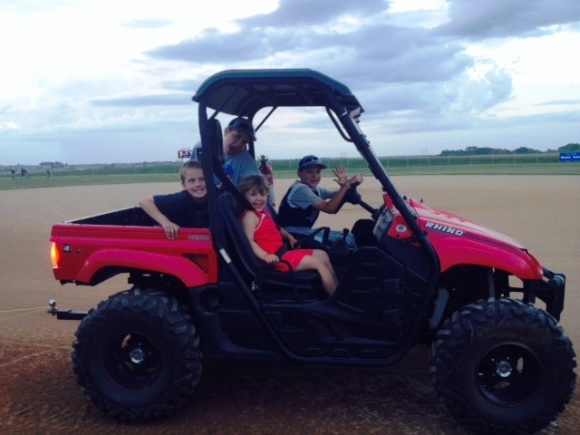 Win or lose? Who cares as long as we get to ride the Rhino to drag the field.

#5 Be appreciative of the time that coaches take investing in your child. You may not agree with every piece of strategy they deploy, but every move is made with the full intention of making the team better today than what they were yesterday.

#4 Resist the urge to correct umpires. I’ve come to realize you will run into three types of umps: Those who can tolerate the game, those who love the game, and those who think they are God’s gift to the game. Each type will make mistakes because they are human.

#3 Walk away from drama. Don’t cause it yourself. After all, it’s a GAME. It’s a seemingly never-ending one, but it is a GAME.

#2 Be proud of the boys who succeed and build up the boys who don’t. Whether on or off the field, your child will feel what it’s like to be in both situations throughout their lifetime.

#1 Remember you can never have enough sunflower seeds, peanuts, or farmer’s tan.